By Venkatachari JagannathanChennai, Aug 10 : With the successful hosting of the 44th Chess Olympiad in India and the great performance by the India-2 team, comprising of teenagers, as well as individual performances, brand Owners may now warm up to having Chess players as their brand ambassadors, said senior officials of a sports management company. 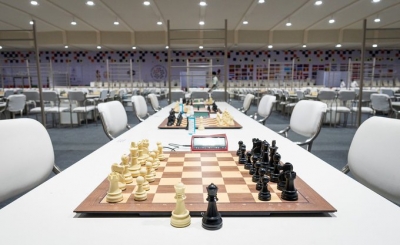 “Unlike many other sportspersons, Indian Chess players globe trot throughout the year playing in tournaments overseas and also win prizes.So, they are constantly in the news unlike an athlete who hits news pages only during the Olympics/Commonwealth/Asian Games,” said a senior official of a sports management company.

They also said, other major Chess events like the India Chess League and Global Chess League are in the pipeline offering additional visibility for the brands.

According to him, for an equity mutual fund, a Chess player will be a good fit.

“In fact, the Association of Mutual Funds in India (AMFI) could use a Chess player in promoting the mutual fund culture,” Pai added.

Some mutual funds have shown a Chess board with a couple of pieces in their advertisements.

“Generally, investments are linked to strategies and computers to their computing power, both of which Chess players signify,” Susan Polgar, winner of four women’s world championship and five Olympic gold medals in Chess, had told IANS earlier.

In India, the sportsmen-brand ambassador segment is nearly monopolised by a few cricketers.

“It is really a monopoly out there in Cricket as far as brand endorsements are concerned.The reason for that is not really known.

Only one player corners the brand endorsement deals.Perhaps regional brand Owners who can’t afford the top-most player may go for other cricketers,” an industry official told IANS not wanting to be quoted.

“Cricket is the lowest common denominator in the country.So, brands used by everybody will look for cricketers.

There are niche brands and niche sports like golf, Chess and other Olympic sporting events.These games are played by a small percentage of the total population in each country but are gloBally known.

So, niche product companies will look at such sportsmen,” Harish Bijoor, brand expert and founder of Harish Bijoor Consults Inc, had told IANS.

He also said there are mass brands that look at non-cricketers for want of funds and brands that are flush with money who go for different sportsmen.

Even though there are several Indian Chess players who figure in the top 20s in the world in different categories, barring former world champion Viswanathan Anand, the recall value of others is less outside of chess.

However youngsters like D.Gukesh, R.Praggnanandhaa, Arjun Erigaisi and Nihal Sarin are the players who are already making waves in the global Chess world.

For instance, Gukesh kept the Olympiad venue on fire winning eight games continuously and finally won the individual gold Medal apart from being the architect for India-2 team’s bronze Medal in the event.

“Brand Owners will look at the Young boys who have made their mark now and have a long way to go.Older players who have higher ratings may not be in favour of the brand Owners,” an official said.

So, what are the do’s for a Chess player to attract brand owners?

“Apart from being at the top in the field there are other important aspects — persona and presence in social media — for a Chess player to attract brand Owners,” Bijoor said.

Additional aspects like glamour quotient, involvement in social causes, married to another celebrity in the same field or in a different field, Bijoor listed out.

According to him, the ‘couple quotient’ has a distinct advantage and the combination appeal outperforms their individual appeal.

But it will be a long grind for a Chess player to position himself to attract brand endorsement deals.

“Chess is a global game.World Chess champions are global properties.But it is a niche segment in many countries.So, like their pieces on the board, player positioning is important,” Bijoor had said.

Several Chess Grand Masters have told IANS that their primary focus was on the fight to survive with meagre funds and didn’t have other thoughts or means about their market positioning.

This correspondent has experienced the haughty attitude of an Indian Chess Grandmasters’ (who was part of the Olympiad bronze medal-winning open team some years back) father who never provided access to the player when contacted nor had the courtesy to call back.

(Venkatachari Jagannathan can be contacted at [email protected])