Bhadohi, Oct 3 : A 12-year-old boy was killed and at least 52 people were injured after a fire broke out at a Durga Puja pandal in Aurai town of Uttar Pradesh’s Bhadohi district, late on Sunday night. 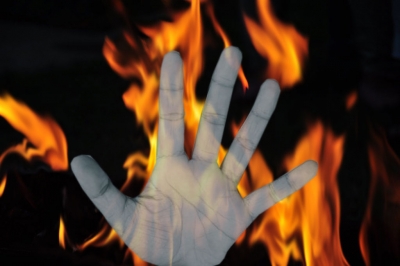 The deceased was identified as Ankush Soni.

Of the 52 persons, 22 suffered severe burn injuries and have been taken to Banaras Hindu University (BHU) Trauma Centre in Varanasi.They are believed to be in a critical condition, the officials said.

Bhadohi district magistrate Gaurang Rathi said prima facie, a short circuit appeared to be cause of the fire.The incident took place in a pandal near Aurai Police station.

“An incident took place at the time of ‘aarti’ (prayers), which was the peak time.There were around 150 people inside the pandal.Over 30 people suffered burn injuries after which some were rushed to Surya Trauma Centre, Community Health Centre, Gopiganj and Anand hospital,” the official said.

“While a short circuit appears to be the main cause of the fire, we are waiting a confirmation from our technical team, which is investigating the case”, he said.

Varanasi police commissioner A.Satish Ganesh said: “Soon after getting information that the victims are being brought to BHU Trauma centre, we created a Green Corridor to ensure hassle-free transportation of the victims.”