Agra, Dec 18 : A sick 60-year-old Blind Elephant has been brought to a specialised Elephant Hospital here for medical care and treatment. 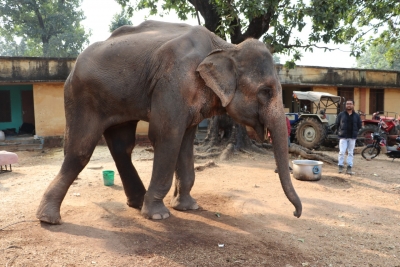 The visually impaired Elephant is severely debilitated, suffers from degenerative joint disease and severe arthritis amongst other chronic medical issues.

Used for begging on the streets for decades and also in wedding processions, “Ginger” was Rescued in a joint operation of the Forest Department and Wildlife SOS.It was then transported in the Wildlife SOS Elephant ambulance to the Elephant Hospital in Mathura, the first and only specialised Elephant hospital in India.

As part of the mission to offer protection and care for elephants in distress, the Wildlife SOS established the Elephant Hospital and the Elephant Conservation and Care Center in collaboration with the UP Forest Department.

A preliminary medical examination by the veterinary doctors at the Elephant Hospital revealed multiple medical and chronic health issues as well as the deteriorating physical condition of “Ginger”.

The Blind and geriatric Elephant is severely malnourished, with chronic wounds on her body and suffers from degenerative joint disease and arthritis.Her foot pads are extremely worn down from excess use on roads to such an extent that the delicate foot pads are on the verge of separating.

The Elephant finds it excruciatingly painful even to walk or stand which is further confirmed by the animal shifting weight from one leg to anther.

The Uttar Pradesh Forest Department will be initiating legal action against the offenders.

Kartick Satyanarayan, CEO of Wildlife SOS, said: “We are deeply perturbed to see the fragile state of this poor Elephant and are extremely grateful for the quick intervention of the UP Forest Dept to shift this Elephant to the hospital to help save her life.”

Holding her previous owners responsible for her condition, Dr Ilayaraja, Deputy Director – Veterinary Services, Wildlife SOS, said: “We suspect that Ginger’s blindness was caused by negligence of previous owners and severe malnourishment.We have prescribed a calibrated diet of nutritious vegetables, fruits and green fodder which will help Ginger regain her strength.We will give her regular laser therapy sessions as well as wound dressing and frequent medical check ups.”Baiju Raj M.V, Director Conservation Projects for Wildlife SOS, said: “As Ginger’s condition is quite critical, our veterinary doctors have already started with her medical treatment.We are very grateful to the Hathras Forest Division CF and DFO for timely intervention to rescue Ginger and shift her to the Wildlife SOS Elephant Hospital to provide necessary treatment and care.”Geeta Seshamani, Co-founder & Secretary of Wildlife SOS said: “It is heartbreaking to see the physical and mental condition of Ginger.We can not imagine the turmoil the poor Elephant has been through as she was used for begging and weddings on the streets for decades.” bk/shb/

Dr Ilayaraja (Deputy Director – Veterinary Services at Wildlife SOS), held Ginger’s previous owners responsible.She stated: “We believe Ginger’s blindness is due to negligence by her owners and severe malnourishment.Ginger will be able to regain strength by eating a balanced diet that includes nutritious fruits, vegetables and green fodder.

Regular laser therapy sessions will be given to Ginger, as well as regular wound dressings and medical check-ups.Baiju Raj M.V., Director Conservation Projects at Wildlife SOS said that Ginger’s medical condition was very serious and her veterinary doctors had already begun treatment.The Hathras Forest Division CF, DFO and Wildlife SOS Elephant Hospital for their prompt intervention in saving Ginger and transferring her to Wildlife SOS Elephant Hospital are our sincere thanks.

Geeta Sashani, co-founder and secretary of Wildlife SOS stated: “It’s heartbreaking to watch Ginger in such a poor physical and mental state.It is hard to imagine what the Elephant went through after she was used as a begging animal and for weddings in the street for many decades.