Chandigarh, Jan 24 : Congress leader and former Chief Minister Bhupinder Singh Hooda on Tuesday said the BJP-JJP government is running Haryana in back gear as the state was number one in per capita income, per capita investment, employment generation and development in 2014 but they made it number one in unemployment, corruption and crime. 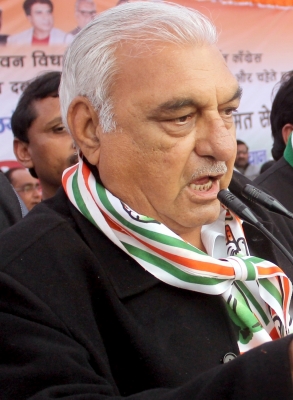 Addressing the media along with Congress state President Chaudhary Udaybhan, he said the government is weakening the Panchayati Raj system by enforcing the e-tendering on sarpanches.

“The government’s negative attitude towards panchayats and villages became evident when it repeatedly postponed elections.Eventually elections were held on the orders of the court and the sarpanch was elected by the votes of the public.

“But now the government does not want to allow them to work.So they were caught in the web of e-tendering.

Similarly, PRI grants are also not being given for the last two years,” he said.

The Leader of Opposition also accused the government of dividing the education system.

He said there is a shortage of teachers in schools as well as in colleges.“More than half of the 4,500 posts are lying vacant of about 8,000 sanctioned posts in state colleges.”

He demanded quick and transparent recruitment on the vacant posts.He said the High Court has once again exposed the fake transparency of this government.

“The recruitment of junior draftsman in the Country and Planning Department has been proved rigged.Therefore, the court has imposed a fine of Rs 1 lakh on the HHSC.

The government cannot blame the recruitment scams only on the HSSC or the HPSC.Such big and repeated scams are not possible without the patronage of the government.”

He said after coming to power, the BJP put a brake on the efforts that the Congress government had started to give fair rates to the farmers for their crops.

“The Congress increased the rate of sugarcane from Rs 117 to Rs 310 per quintal during its tenure.During this, the rate increased by 165 per cent i.e.17 per cent every year.But the BJP has increased only 17 per cent in its total tenure of eight and a half years till now,” he said.

Hooda demanded an impartial inquiry into the allegations leveled by the wrestlers against the wrestling association and its President.

He said that the wrestling federation president dragged his and his son Deepender Hooda’s names in the case to divert attention from the allegations against him.

Regarding this, there will be a meeting of the party in the state office on January 25 at 2 p.m #BJPJJP #Haryana #gear #Hooda #Telugu #TeluguStop #Jan #Chandigarh #Haryana #Chandigarh #Congress #Photo