Gandhinagar, Dec 8 : It is a big win for the BJP and the AAP in the Gujarat Assembly elections with the former bagging 53.33 per cent vote share and the latter getting a 12 per cent share. 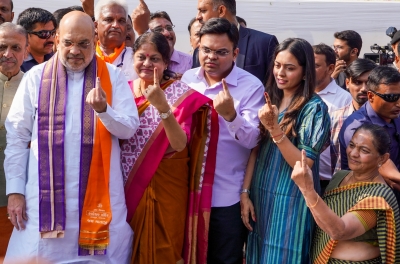 The Congress share has shrunk to 26.9 per cent, as per the Election Commission (EC)figures of 12 p.m.

According to the EC data, BJP was leading in 150 seats, Congress in 22 seats, AAP six, Samajwadi Party on one and independent on three seats.

BJP General Secretary Pradipsinh Vaghela told the media that people have rejected the Congress and AAP both, and one more time Prime Minister Narendra Modi led the party to not just a landslide victory but the BJP has won record breaking seats, setting a new record in Gujarat’s electoral politics.

Congress candidate Lalit Vasoya alleges that the AAP worked as the ‘B’ team of the BJP by denting the Congress votes.”Its presence helped the BJP to cross 150 seats,” said Vasoya.

What is surprising is that the AAP, which for the first time aggressively contested the elections in Gujarat, has so far fetched 12 per cent votes and its candidates are leading on six seats.

But, there is also a shocker for the AAP, as its faces like Isudan Gadhvi, Gopal Italia, Alpesh thakor were trailing at this point.

The one prominent face of the Congress who was leading was Arjun Modhwadia.