Madrid, Oct : Besides an uphill struggle to book their place in the knockout stage of the Champions League, FC Barcelona’s 1-0 defeat to Inter Milan on Tuesday has left coach Xavi Hernandez with problems in defense. 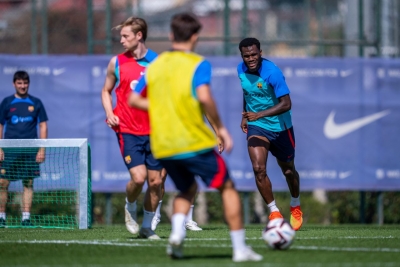 Although Barca can look to a dreadful decision by the VAR not to award them a late penalty after a handball in the Inter penalty area, that should not disguise a poor performance on the night.

The defeat means Barca have to beat Inter next Wednesday in Camp Nou and probably also Bayern Munich to book a place in the last 16 that is so important to the club’s economy.

Xavi was without players such as Ronald Araujo, Jules Kounde and Hector Bellerin, Memphis Depay and Frenkie de Jong on Tuesday and then lost Andreas Christensen with twisted ankle ligaments during the game, reports Xinhua.

That leaves the coach with only Eric Garcia and Gerard Pique (who started the season as fifth-choice center-back) as his only fit central defenders for Saturday’s home game against Celta Vigo and possibly the return meeting with Inter Milan.

Although De Jong could possibly be fit for the weekend and either Sergio Busquets or Marcos Alonso could play as an emergency central defender, it is still worrying for Barca, who also travel to play Real Madrid on October 16.

Araujo will be out until after the World Cup and Wednesday’s tests find Christensen’s ankle injury serious, he too could face a long spell on the sidelines.

Tuesday’s defeat has another negative effect for a Barca side with just three points from their opening three Champions League group matches: they will have to give everything in their remaining three group games to have a chance of qualifying.

With so much at stake, Xavi has no option but to field his strongest side in every game.However, for Real Madrid, who are already on the verge of booking their place in the last 16 in the Champions League, coach Carlo Ancelotti could dose the efforts of his squad between now and the middle of November.