Washington, Dec 8 : Just a week before the 10th anniversary of the 2012 Sandy Hook school shooting that claimed the lives of 20 children and six teachers, US President Joe Biden attended a national vigil for victims of gun violence. 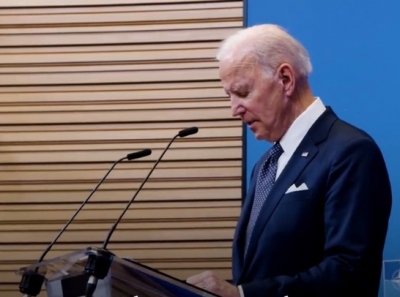 Wednesday night’s vigil at the St.Mark’s Episcopal Church on Capitol Hill, sponsored by the Newtown Action Alliance Foundation, has occurred every year since the December 14, 2012 carnage, which remains one of the deadliest school shootings in US history, reports Xinhua news agency.

Addressing the vigil which was attended by families and friends of the Sandy Hook victims as well as survivors, Biden said that “together, we made some important progress: the most significant gun law passed in 30 years, but still not enough”.

The President reiterated his call for a ban on assault weapons, saying that the measure is “just common sense”.

Biden became the first President to attend the National Vigil for All Victims of Gun Violence, which has honored more than 1 million gun violence victims since the Sandy Hook massacre.

According to the Newtown Action Alliance Foundation, by this December, “over one million Americans will be killed or injured by guns since the Sandy Hook shooting tragedy”.

The US has suffered a series of high-profile mass shootings this year.

Last month, a night-shift manager at a Walmart in Chesapeake, Virginia, opened fire inside the supermarket, killing six and injuring four others before taking his own life.

Days earlier, a gunman wielded an AR-15-style rifle, killing five while wounding 19 others at a nightclub in Colorado Springs, Colorado.

On May 14, Payton Gendron, a 19-year-old gunmann 10 African-Americans and injured three others in a racially motivated attack at a supermarket in New York’s Buffalo city.

Ten days later on May 24, an 18-year-old killed 19 children and two teachers in a mass shooting at the Robb Elementary School in Uvalde, Texas.

The US has suffered more than 600 mass shootings so far this year, according to the Gun Violence Archive.