By Santosh Kumar PathakNew Delhi, Sep 22 : The Rashtriya Swayamsevak Sangh (RSS), which is the key driving force behind the country’s ruling Bharatiya Janata Party (BJP), is a prominent organisation which has ardent followers and staunch critics in equal proportion. 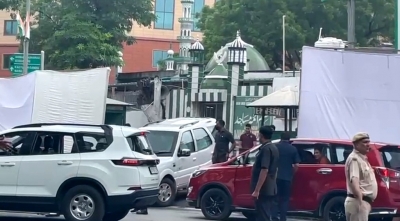 However, the recent meeting of RSS chief Mohan Bhagwat with Muslim intellectuals and his Tursday’s meeting with the head of All India Imam Organisation at a mosque in Delhi, which was followed by a visit to a Madrasa here, have drawn everyone’s attention — in the political as well as apolitical circles.

Bhagwat on Thursday visited a Madrasa in the old Delhi area where he interacted with the teachers and students.Earlier, he met the chief of the All India Imam Organisation, Imam Umer Ahmed Ilyasi, at a mosque in Kasturba Gandhi Marg.

On August 22, the RSS chief had met a group of Muslim intellectuals.

The recent developments are being termed as RSS’ attempt to strengthen the communal harmony in the country.

Also, the meetings, interactions and the deliberations have been happening in the backdrop of allegations by the Opposition leaders, including former Congress chief Rahul Gandhi, that the BJP and the RSS are trying to fan communal tension in the country.

Several questions have been popping up of late following Bhagwat’s hobnobbing with the key personalities of the Muslim community.

The prominent among them are:

* Is RSS’ Stance towards Muslims changing?

* What could be the agenda of RSS behind these meeting?

* What exactly Mohan Bhagwat is trying to achieve?

To get a deeper insight into the recent developments, IANS reached out to RSS Prachar Pramukh Sunil Ambekar, who maintained that the Sangh has always opposed terrorism and separatism.

He said: “Everyone should strive to create a spirit and environment of cordiality by opposing extremism.This is everyone’s collective responsibility.”

“RSS never had any problems with anyone’s ways of worship or offering prayers,” he added.

Responding to questions doing the rounds around Bhagwat’s meeting with the Muslim intellectuals, Ambekar said: “The RSS is always ready for holding discussions for the betterment of the society and the nation.The Sangh has always kept its doors open for this purpose.Even on the Ayodhya issue, we had held discussions with everyone.”

“To promote cordiality, we always insist on holding discussions with various sections of the society.There is nothing new in this.It’s part of a routine process,” he said.

RSS leader and patron of Muslim Rashtriya Manch (MRM), Indresh Kumar, said that right from former RSS chief K.S.Sudarshan’s tenure, the members of Muslim and Christian communities have been trying to understand the Sangh not through any religious or political leaders, but on their own.

“That is why an organisation like MRM came into existence,” he said.

Meanwhile, sources in the know of things also said that in the coming days, the RSS chief may hold deliberations with the Christian religious leaders as well as intellectuals of the minority community.

It is being said that to communicate seamlessly with the religious leaders and intellectuals of both Muslim and Christian communities, the RSS has set up a committee of four senior Sangh leaders.

In fact, the RSS had initiated an effort to bring a change in the mindset of the Muslim community since the era of former Prime Minister late Atal Bihari Vajpayee.However, the overall scenario was much different then as key issues such as Ram Janmabhoomi was yet to see any solution.

Also, several matters were pushed into the cold storage since the government was functioning on the back-up of alliance parties.

In fact, the MRM has held several functions wherein communications were established with the members of Muslim as well as Christian community.Sources said that those programmes have been mostly successful.