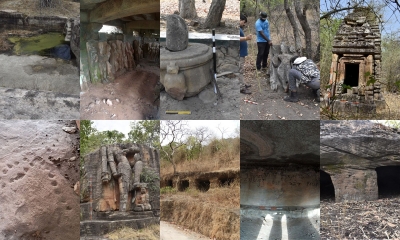 During exploration from May 20 to June 27, an ASI team, led by Superintending Archaeologist of Jabalpur circle Shivakant Bajpayee, has found 26 temples or remains of temples, 26 caves, two monasteries, two votive stupas as well as 24 inscriptions along with 46 sculptures and around 20 water structures.

The ASI has also found coins belonging to Sharqi dynasty of Jaunpur Sultanat.

“Twenty-six temples or remains of temples discovered during the fresh round of exploration works belongs to the Kalchuri period – 9th to 11th century CE, while 26 caves dating to 2nd century B.C.to 5th century A.C.period,” as per ASI’s claim.

The exploration of nearly 170 sq km of core forest area that was not accessible to the public for around a month also led to the discovery of the remains of Buddhist structures predating the Hindu rulers of the region.

Notably, this exploration project has been restarted after a gap of 85 years.

Earlier, the exploration in Bandhavgarh forest area was carried out in 1938.

The exploration project will be carried out further also and the ASI team is expecting to identify 100 more caves in the forest reserve area of Bandhavgarh.

According to Bajpayee, the first phase of exploration work was carried out in Tala range of Bandhavgarh.Notably, Tala is a town located in outer circle under Rewa district.

In the next phases of exploration, the ASI team will cover the remaining area of Bandhavgarh forest from Khitauli to Magadhi range.