Los Angeles, Oct 3 : Actress Mila Kunis recently revealed that her husband Ashton Kutcher confessed his love for her in a drunken state. 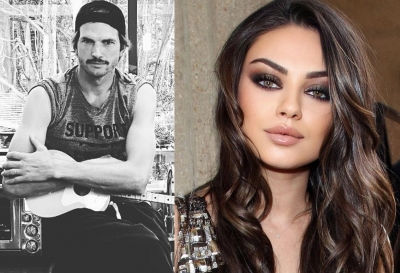 The pair appeared together at the start of their career on hit sitcom ‘That ’70s Show’ before forging their successful careers, reports Mirror.co.uk.

But away from the camera, love was blossoming.And now Mila has confirmed Ashton’s comments regarding the first time he told her he loved her.The ‘A Lot Like Love’ star, 44, confessed he made his announcement while he was drinking and now Mila has admitted this was actually the case, saying he had plied himself with Tequila.

Speaking to Entertainment Tonight at the premiere for her new flick ‘Luckiest Girl Alive’, Mila said her man had had “a little too much tequila”.

“It really happened,” she revealed, quoted by Mirror.co.uk.”Oh, I remember that night.I didn’t have tequila.I was sober and I was like, ‘Oh my god.’ It happened, guys.”

Mirror.co.uk further states that she also admitted that she repaid the sweet gesture after realising she too was in love.The comments come after the duo had to deal with a worrying situation during lockdown in which Ashton says he’s “lucky to be alive”.

The actor detailed the awful symptoms that he suffered due to a rare autoimmune disorder in an episode of ‘Running Wild with Bear Grylls: The Challenge’.