Lucknow, Dec 1 : As temperatures plummet in Uttar Pradesh, special arrangements are being made to protect animals and birds from biting cold in the Lucknow and Kanpur zoos. 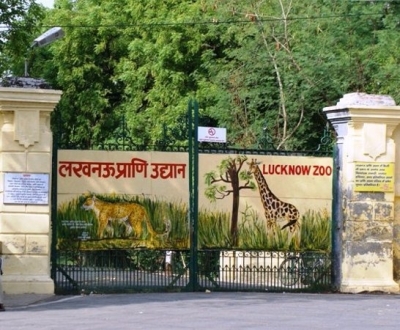 Director of the Lucknow Zoo, V.K.Mishra, said that all enclosures had been covered with tarpaulin and plastic sheet to protect the inmates from cold winds.

Special care is being taken to protect the birds that are more susceptible to vagaries of the weather, he added.

The carnivore and deer enclosures have been equipped with para grass for better insulation of heat.Wooden planks have been installed on the floors in the enclosures of tigers, lions, leopards and other carnivores for the same purpose.

The birds are being given coarse grains like bajra, jawar, grams while cranes are being fed additional diet of fish.Birds are also being given seasonal fruits, vegetables and even bread.

“The monkeys, chimpanzees and other primates have been given blankets to keep them warm and are being given more eggs in their meals.We have hung up thick curtains in some of the birds’ enclosures so that they are not impacted by the cold breeze that blows at night,” he added.

The serpentarium, which houses about 40-50 snakes at the moment, has been furnished with three heaters, and the temperature is kept between 25 and 30 degrees Celsius.

Shukla said that if the weather gets even colder then heaters would be installed in some of the carnivore, primate enclosures as well.

“We try to block the cross-ventilation, so that the cold waves do not harm the animals.”

The zoo also has a room set up as a critical care unit in case animals fall sick and require immediate medical attention.They also have firewood at hand, in order to light bonfires in case the temperature drops to sub-zero levels in the coming months.

The carnivorous animals are being given additional doses of vitamin A and D.

The bears are being served ‘kheer’ made with jaggery while chimpanzees and ostriches are being given boiled eggs.The chimpanzees are also relishing on fruits and are getting them in ample measure for their winter diet.

There are over 1,000 inmates in Lucknow Zoo and that includes about 500 birds.The Kanpur Zoo has about 1,250 inmates.

As Winter Sets In

As Winter Sets In, Special Diet For UP Zoo Animals