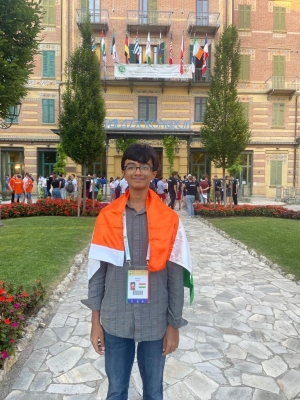 He was awarded the Gold in Overall Performance in the U-16 category.Anshul, who has been playing Bridge since the age of six, is the youngest winner of three Gold medals at the World Bridge Championships where participants from over 30 countries took part.

“I had a dream run at the Championships and am elated to have won three Golds for India on the 75th anniversary of our independence,” Anshul said.

“I have been coached and mentored by many great Bridge players in India and abroad throughout my career.I would like to thank Mr Keyzad Anklesaria from India and Mr Eric Kokish from Canada for coaching Darwin and me for the 2022 championships.

I would also like to thank the entire Bridge community in India for their support,” he added.

Bob Hamman, one of the greatest Bridge players of all time, said in a lighter vein, “Well done.I am glad that my opponents are not as tough as Anshul.”

Eleven teams had participated in the qualifying rounds, and Team Blitz was the fourth and last team to enter the semifinals, which were played on August 12 against Poland’s CKIS Skawina U15.

In the finals against the USS Unsinkable, the Blitz team, which was trailing by 10 points after the second round, recovered lost ground in the third round with a two-point lead and ended the fourth round with a 23-point lead to bag the championship.

Anshul won the gold medal with Canada’s 15-year-old Darwin Li in the pairs event at the under-16 World Youth Transnational Bridge Championships.