San Francisco, Sep 29 : A prototype of an all-electric airplane, named Alice, took its first flight in central Washington state in the US this week. 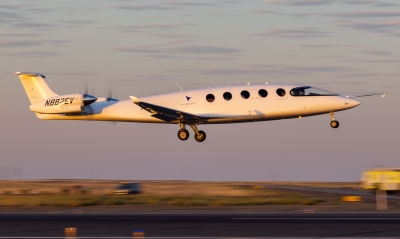 According to The Seattle Times, the plane took two wide turns around the airfield, climbing to 3,500 feet.It took off at 7.10 a.m.on Tuesday and was designed to accommodate nine passengers and two pilots.

People on the ground could hear the propellers in the back of the aircraft whirring and buzzing as it went directly overhead.Just 8 minutes later, the aircraft made a safe landing, the report said.

The plane was designed and built by Arlington-based start-up Eviation to demonstrate the potential for an electric commercial commuter aircraft flying a few hundred miles between cities at an altitude of around 15,000 feet.

The name of the aircraft was inspired by Lewis Carroll’s fantastical stories of Alice’s adventures in Wonderland.

With a weight of a little over 4 tonnes, it is powered by slightly more than 21,500 small Tesla-style battery cells, which account for more than half of the carbon composite airframe’s weight.

The technology is pioneering and puts this region at the forefront of efforts to develop a zero-emission, sustainable era in aviation.

But whether it can deliver the economic returns necessary to become a commonplace mode of air travel remains highly uncertain, the report said.