Amaravati, Dec 8 : A cyclone alert has been sounded in south coastal districts of Andhra Pradesh, officials said on Thursday. 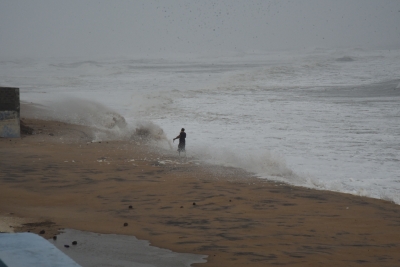 This followed the deep depression over southwest and adjoining southeast Bay of Bengal intensifying into a cyclonic storm.

The storm has been named ‘Mandous’ pronounced ‘Man-Dous’, the IMD said.

Under the impact of the cyclone, heavy to very heavy rains at isolated places are likely over the next three days in Prakasam, SRSP Nellore and Tirupati district in South Coastal Andhra Pradesh and in Chittoor, Annamayya and YSR Kadapa districts in Rayalaseema.

Andhra Pradesh State Disaster Management Authority said that alert messages have been sent to over a million subscribers through common alert protocol.

Authorities have been directed to regularly monitor the progress of the cyclonic storm.

According to IMD, the cyclonic storm lay centered at 0530 hours about 530 km east-southeast of Karaikal and about 620 km southeast of Chennai.

“It is very likely to move west-northwestwards and cross north Tamil Nadu, Puducherry and adjoining south Andhra Pradesh coast between Puducherry and Sriharikota with a maximum sustained wind speed of 65-75 kmph gusting to 85 kmph around mid night of December 9,” said IMD bulletin.

Under the impact of Mandous, light to moderate rainfall at most places with heavy to very heavy falls at isolated places very likely over coastal Tamil Nadu, Puducherry and Karaikal and isolated heavy rainfall over adjoining areas of south coastal Andhra Pradesh and Rayalaseema on December 8.

It is likely to reduce to Light to moderate rainfall at most places with heavy to very heavy rainfall at isolated places likely over north Tamil Nadu and Rayalaseema and south Andhra Pradesh on December 10.