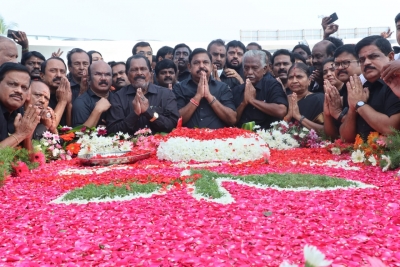 The AIADMK leaders paid their respects at Jaya memorial in Marina beach.The leaders, Palaniswami, D.Jayakumar, K.P.Munuswamy, and others were dressed in black clothes while paying their floral tributes to the former Chief Minister.

J.Deepa, niece of Jayalalithaa paid tributes at the residence of the former Chief Minister, Veda Nilayam.

Jayalalithaa passed away after 75 days of hospitalisation on December 5, 2016, at a private hospital in Chennai.The Justice Arumughaswamy commission, which probed the death of the late Chief Minister, had submitted its report to Chief Minister M.K.Stalin in August 2022.There were several criticisms in the report that include Jayalalithaa not having been taken abroad for treatment.