San FranCisco, Sep 2 : A game designer has won the Colorado State Fair’s fine-art competition by using an AI-generated work of Artwork in the US and has caused some Controversy with other artists, who accuse him of increasing the loss of artistic jobs.According to The Verge, the Artwork titled “Theatre d’Opera Spatial”, which Jason Allen submitted for the Colorado State Fair fine arts competition under the category “Digital Arts/Digitally-Manipulated Photography”, was made using the well-known text-to-image AI generator Midjourney. 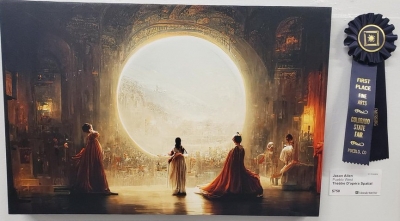 Since the majority of people are not familiar with the way text-to-image AI generators work, many users have claimed that Allen was not honest in the submission of the work.

The assertion was made in response to a widely-shared tweet about Allen’s win.

But, Allen has defended himself and stated: “I wanted to make an assertion with my Artwork using artificial intelligence.”

“I believe I did this, and I’m not going to apologize for what I did,” the report quoted him saying to The Pueblo Chieftain.

Text-to-image AI systems are trained using billions of pairs of images and descriptions of text that they analyze for visual patterns, according to the report.

Users give them text descriptions called prompts and the program generates an image that is in line with this description using the data it learned from, it said.