Mumbai 15 Aug : There are a lot of plaudits on Aparna Sen as her directorial “The Rapist” has earned the Award for the best director of 2022 during the Indian Film Festival of Melbourne.The film was the previous winner of the famous Kim Jiseok Prize at Busan.In what is described as the most precise timing film of the year, ‘The Rapist’, which is the debut feature film of Applause Entertainment was able to return home with an impressive win at the prestigious festival. 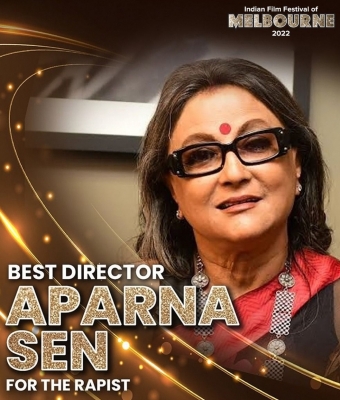 Aparna Sen won the Award for “Best Director” for this hard-hitting movie.

In addition to the feathers in her cap, the Award was even more memorable because it coincided with India’s 75th anniversary of Independence.

“The Rapist” is a thought-provoking study of the human anatomy of the psyche of the perpetrators, as well as the trauma they endure in the aftermath.

The drama also is the first time that we see the reunion of mother-daughter duo of Aparna Sen-Konkona Sen Sharma after a number of critically acclaimed films, like the National Award winning, Mr.and Mrs.Iyer.