Hyderabad 18 August : A veteran actress as well as BJP national executive member M.Vijayashanti on Thursday expressed her displeasure with the party’s Telangana unit’s management.The former MP said that the party’s Leadership wanted him to be silent.However, the actress said that she always enjoys playing important roles. 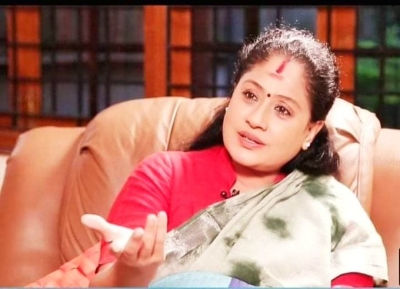 Vijayashanti expressed her displeasure while speaking to reporters following a talk at the party’s state offices where the party’s top party leader and MP K.Laxman offered tributes to freedom fighter Sardar PaPanna Goud on his birthday.

She claimed she wanted to speak on the event.She claimed Laxman came, spoke , then left, and she was unable to comprehend what was going on.

Vijayashanti also said that the party’s state head Bandi Sanjay as well as Laxman should be aware of how they can utilize her services to the party.”I could do anything if the party assigns me the responsibility.Without any obligation, how do they require me to do something,” she asked.

“Ask the leaders of the party” she quipped when asked why she was denied the opportunity to make a statement.

Vijayashanti has also said she believes she is always playing a pivotal role.”I always have the best role.Ramulamma is always Ramulamma,” she said in reference to her film with the name Ramulamma.

It was in December 2020 that Vijayanti returned to the BJP after 15 years.

Famous as “Lady Amitabh for her roles in action in Telugu film, Vijayashanti had joined the BJP in 1997 and was appointed general secretary of the women’s wing of the party.

She has left the BJP in 2005 and opted to launch an independent outfit, Talli Telangana, to fight for a separate statehood for Telangana.

She later joined Talli Telangana with TRS and was elected to the Lok Sabha from the Medak constituency in 2009.

In August of 2013, just a few months prior to the formation of Telangana state TRS removed Vijayashanti for anti-party activities.

She was later a member of her fellow members of the Congress party, but was unsuccessfully ran for the Medak Assembly constituency in the 2014 elections.

After a hiatus of 4 years, Vijayashanti returned to involved in Congress in 2017.

She was then named its top candidate for the party in the 2018 Assembly elections.After the party’s saga, she was not active in the party, and she went back to BJP in 2020.

Vijayashanti is a film actor whose career spans more than 40 years, has appeared in more than 180 movies in Telugu, Tamil, Malayalam, Kannada and Hindi.

Her film appearances were uncommon since 1999 when she began focusing on politics.

After an sabbatical of 13 years she returned to silver screens in 2020 with “Sarileru Neekevvaru,” which features a well-known actor Mahesh Babu in the lead role.