New Delhi, Dec 4 : The Municipal Corporation of Delhi (MCD) elections held on Sunday witnessed a lower turnout of voters compared to the 2017 polls with around 50 per cent of the electorates exercising their franchisee, officials said. 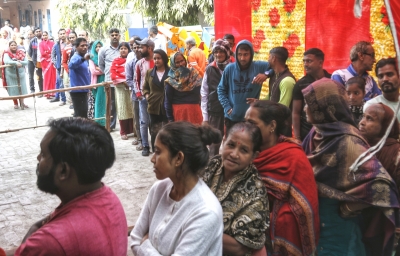 The election officials, citing data available till 5.30 p.m., said around 50 per turnout was recorded, adding the final figures would be known later.The turnout in the 2017 civic body elections was 54 per cent.

A total of 13,638 polling centres were set up for the polling on Sunday.

The polling had started on Sunday morning at 8 p.m.It went on peacefully till its conclusion at 5 p.m.

The results would be announced on December 7.

The prime contest in the civic body polls is mainly between the BJP and the AAP.Both parties have fielded 250 candidates each in all the 250 wards.

The Congress which is expecting to bag more wards this time compared to 2017 civic body elections have fielded 247 hopefuls.