Islamabad 9 August : Four Pakistan Soldiers were killed in an apparent suicide explosion that struck the military convoy in the Mir Ali area of Khyber Pakhtunkhwas North Waziristan district, the military’s media affairs wing reported on Tuesday.According to a statement released by the Inter-Services Public Relations (ISPR) intelligence agencies have begun investigations to discover more regarding the suicide bomber who was responsible for the Attack as well as his accomplices and handlers, Dawn reported. 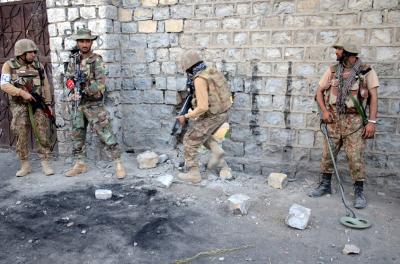 The “Pakistan Army is determined to eradicate the threat of terrorists, and the sacrifices of our brave Soldiers will not be unpunished” the ISPR stated.

Security forces have been targeted in attacks and confrontations with suspected terrorists in the North Waziristan tribal district have become more frequent in the last few months.

On July 4 the 4th of July, the security forces suffered at least 10 guards were injured as a suicide bomber struck an entire convoy of security forces in the area, Dawn reported.

Officials at the time said the vehicle was traveling from Mirali to Miramshah the district’s headquarters, when the suicide bomber was riding the back of a motorcycle was able to blow himself up in front of one of the vehicles.