Junagadh, Nov 29 : Two persons have died and one is in critical condition undergoing treatment at a government hospital after allegedly consuming spurious liquor in Gujarat’s Junagadh district, claimed the brother of one of the deceased victims. 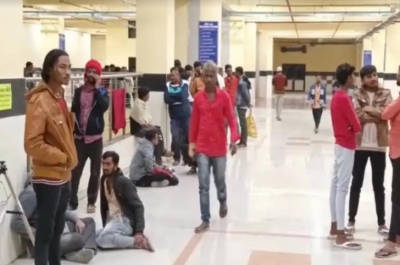 Congress MLA from Junagadh, Bhikhabhai Joshi said the people of Ghachipat society informed him that many people had gathered at the civil hospital as three persons were rushed to the hospital after falling ill on Monday evening.

Joshi told IANS that locals have informed that all the three persons complained of uneasiness and started vomiting and therefore were taken to to hospital.

Two persons have died and the third person is in critical condition, he said.

He added that doctors say it is too early to give a reason for the death but it will be confirmed only after the post-mortem report is available.

One deceased has been identified as Rafiq Ghoghari, the deceased’s brother (name not available) told the local media that he had received a call in the evening informing that his brother had fell unconscious in Gandhi Chowk after consuming some chemical (illicit liquor), so he took him to the government hospital.

However, the doctor declared Rafiq dead but later found that one more body was lying there.He alleges that the deaths could be a hooch tragedy.

Police are deployed at the government hospital and people are not allowed to enter as locals fear that more persons might have fallen victim to illicit liquor and could be brought later in the evening.