London 19th August : South Africa thrashed England by 12 runs and an innings on the third day of the opening Test, taking an 1-0 lead in the series of three matches.They also increase their standing on top of the World Test Championship standings of the ICC which will be announced on Friday.The crushing win at the Lord’s put South Africa one step closer to the ICC World Test Championship final next year.They are at the at the top of the table with the record of six wins and just two losses in this year and a winning percentage of 75.Australia as well as Sri Lanka follow them in the rankings, with England languishing at the seventh position with eight losses this season. 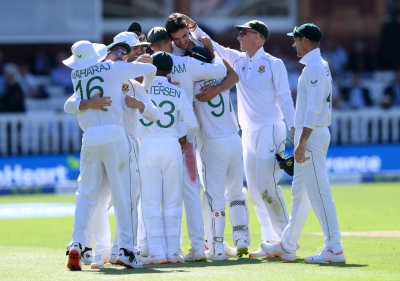 After completing Day 3 at 289/7, South Africa didn’t have a excellent start as Kagiso Rabada was dismissed after a stunning catch by Stuart Broad at mid-wicket.

Maco Jansen found support from Anrich Nortje but the latter couldn’t finish his first Test fifty because he was two runs shy of the milestone.

Nrotje continued to be unbeaten until 28 in the midst of South Africa were bowled out for 326 in their first innings, and took an easy advantage of 161 run.

In the second innings of England, Proteas skipper Elgar pulled a rabbit out of his hat when he gave Keshav Maharaj a ball after the sheen had faded off the ball.After coming in to play in the eighth over of England’s innings left-arm spinner took two big wickets prior to lunch to make sure that South Africa firmly in control.

It was Lungi Ngidi who put South Africa far and wide ahead with the huge wicket of Joe Root shortly after lunch Nortje ended England’s hopes in the Test in an utterly dazzling 10-ball volley which took three wickets, and let out zero runs.

Nortje returned Jonny Bairstow for a second time in the Test match, and then saw Alex Lees and Ben Foakes removed in the following over, completing the demolish.

South Africa bowled out England for the sum of 149 in the second innings winning by 12 runs and an innings to maintain their dominance at the Lord’s since the re-admission.

South Africa have had five wins of their seven matches played at Lord’s since 1992.and lost only once.