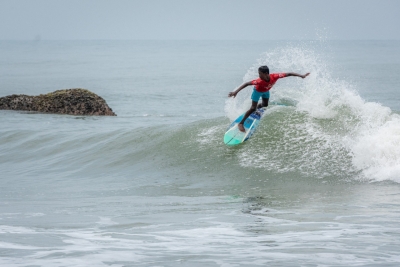 In the final against Lankan top surfer, Praneeth S, Kishore maneuvered the waves beautifully to win the race by a slender margin of 0.17 points and earned a total score of 12.40 and Praneeth scored 12.23.Ajeesh Ali secured the third place in this category.

The morning of the final day of the Covelong Classic was sunny and bright and there was a significant crowd who turned up for the event.The conditions were not so favourable for Surfing but it didn’t dampen the spirits of the competitors.

In the Groms (16 & Under) Boys, Kishore Kumar who had earlier won the International Open easily won the finals, 5 points ahead of Naveenkumar R who finished in second place.

Kishore Kumar scored 15.16 points while Naveenkumar R scored 10 points.The other finalists were Kalapathy S and Tayin Arun who scored 9.16 & 6.17 respectively after the finals.

In the Women’s Open, defending champion Srishthi Selvam retained her title by a huge margin of 7 points over Kamali P who had to be satisfied with the second place as her second highest wave count was deemed as a technical foul.The winner from Mahabs Point Break Challenge, Sugar Banarse couldn’t perform to the same level as she finished with a low score of 2.67 points.Sophia Sharma (2.33) was the other finalist in this category.

In the Mens Open finals, Ajeesh Ali was crowned the national championship with a score of 15.60 points who defeated the young sensation Kishore Kumar who could only score 11.17 points.Nitishvarun T (9.67) AND Manikandan D (8.97) finished in third and fourth.

Ajeesh Ali with this win in Covelong, finished 1st in the national rankings for the season of the year 2022.He was presented with a Jawa Yezdi (motorbike) for this achievement.

“Covelong Classic has been a huge success by just the number of participants who had taken part in the event.The International Open and the festival added glamour to this event.All this is helping us to achieve our goal of spreading the sport of surfing in the country,” said President of SFI Arun Vasu.